Ren, a decentralized finance protocol friendly to Ethereum that enables inter-blockchain liquidity, has announced the launch of the RenVM mainnet.

The company said that RenVM will bring cross-chain assets to the Ethereum ecosystem. This will begin first with the introduction of BTC, BCH, and ZEC, and later with other digital assets.

Interacting with other blockchain networks has been one of the longest-prevailing problems the Ethereum decentralized finance space has had to deal with. And while the smooth transitions between public blockchains are still a long way ahead, the goal has become a bit more attainable thanks to the launch of Ren Protocol’s core product.

The inter-blockchain liquidity provider has announced the mainnet launch of the Ren Virtual Machine (RenVM), a decentralized custody solution that allows the seamless movement of assets between blockchains.

“Generic interoperability has been a thorn in DeFi’s side, and we’re thrilled that RenVM is now solving this problem by enabling cross-chain liquidity to crypto investors everywhere,” said Taiyang Zhang, CEO and co-founder of Ren.

The Company Has Big Plans For the Ren Protocol

According to the announcement, the company seems to be trying to get ahead of the revolution that is about. Loong Wang, the CTO and co-founder of Ren, said that Ren is setting out to provide a “catch-all utility” for the next generation financial system where blockchain interoperability is the norm.

“Our goal is for RenVM to function as a bridge between not only Bitcoin and Ethereum, but any imaginable pair of blockchain-based tokens, including stablecoins like Libra and China’s digital yuan,” he said.

The company’s core product, RenVM, will act as a decentralized custodian of various crypto assets. For each token it holds, it mints another that is represented on the Ethereum blockchain in the form of an ERC-20 standard token. This approach, while currency applied only to the Ethereum ecosystem, can be applied to other smart contract protocols such as Polkadot and Tezos.

In-house advancements made to the Secure Multi-Party Computation (sMPC) will allow users to move assets to and from any blockchain without the need for a centralized mechanism or a permissioned system, the company explained.

The protocol’s native token, REN, has reacted strongly to the mainnet launch. It began a slow and steady rise in the first week of May, as holders most likely anticipated a significant price movement once the RenVM launched. The coin saw its price increase by more than 50% this month, rising from $0.068 on May 1 to $0.103 on May 27. 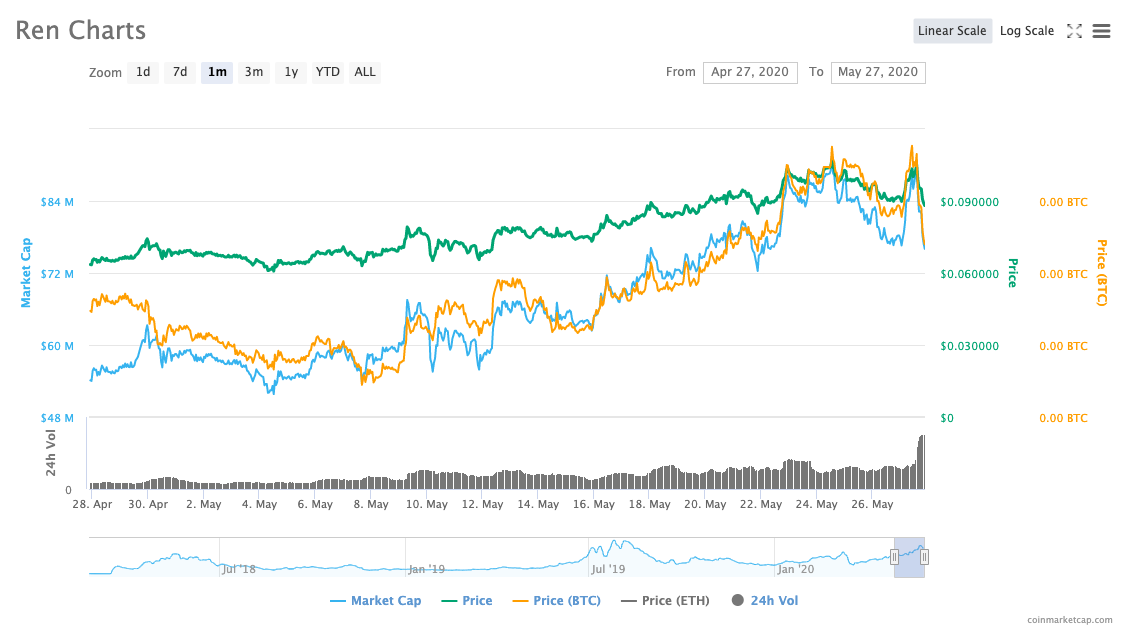 Graph showing REN’s price from Apr. 28 to May 27. (Source: CoinMarketCap)

Tags:
Previous Article
Trump Threatens to Close Down Social Media Platforms After Twitter Tampers With His Tweets
Next Article
Analysts are Cautious of the Crypto Market’s Latest Push Higher; Factors to Consider

Gemini CEO on How the Federal Reserve Will Boost Bitcoin’s Next Bull Run
Mainframe AI July 23, 2020

Analysts are Cautious of the Crypto Market’s Latest Push Higher; Factors to Consider
Mainframe AI May 28, 2020