Bitcoin’s price action may be weak, but not the same can be said about the stock market.

Ahead of Monday’s open, the futures of the S&P 500, Dow Jones, and other American indices are up by over 1.5%. But it’s an even more impressive site in Asia, especially China, where the stock market is hitting an all-time high.

Analysts say that strength in the stock market, especially China’s, could set a bullish precedent for Bitcoin and crypto.

The FTSE’s China A50 index has surged over 6% higher during Monday’s trading session. With this latest move higher, the index is at an all-time high. 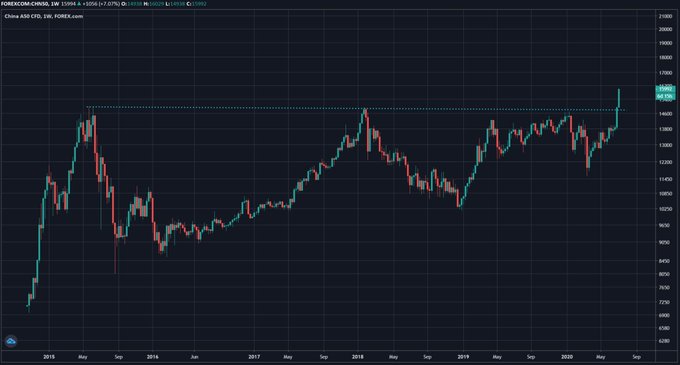 “Over the weekend, many economists and strategists from Chinese brokers claimed that the A share bull market has begun due to PBOC’s monetary policy.”

There has also been optimism about China’s economy, which purportedly wasn’t crushed as hard as some forecasted.

According to Amber Group, the crypto market potentially will benefit from an ongoing rally in Chinese stocks. The company explained that the FTSE China A50 index hitting new highs shows that Chinese investors are risk-on, potentially boosting Bitcoin. The idea here is that if stocks are rallying higher, investors have more capital and will be more inclined to buy cryptocurrency.

The correlation between Bitcoin and Chinese stocks isn’t well tracked. But as can be seen above, the index began to rally in 2016 when Bitcoin did and topped in 2018 exactly when cryptocurrencies did.

Stock Rally May Not Last for Long

Unfortunately for Bitcoin bulls, not everyone is convinced the rally in the stock market will last forever.

Mad Money’s Jim Cramer said on Wednesday that stocks may have an “ugly” short-term future. The trader and personality pointed to a chart suggesting that the S&P 500 remains trapped below resistance levels.

Scott Minerd, the global CIO of Guggenheim Investments, has echoed the bearish sentiment. He told CNBC’s “Closing Bell” segment in June that with stocks intrinsically overpriced and a technical uptrend broken, stocks could fall.

Minerd specifically speculated that the S&P 500 could fall to 1,600, a 50% retracement from current levels.

U.S. stocks, of course, are not Chinese stocks. But a slowdown in the U.S. should correspond with a slowdown in China — and vice-versa.

Bit Mining to Deploy Another 2,500 Bitcoin Miners in Kazakhstan